Help! My Chimney Smells When It’s Humid, What Do I Do? 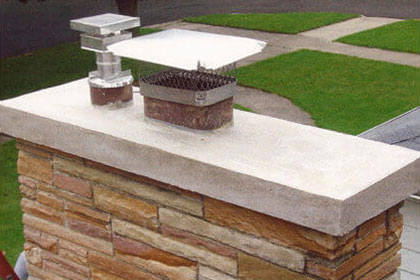 During the summer, it can get extremely humid and cause problems with different systems in your home. When humidity is in the forecast, you might notice some smelly odors coming from your chimney.

The humid air can affect your chimney, especially when water and substances in your chimney mix. We always recommend scheduling a chimney inspection and sweep to find the cause of the smell. If the chimney cleaning doesn’t resolve the smell, your home could have negative air pressure.

To combat the negative air pressure, you can close the damper when the fireplace isn’t in use, or install glass fireplace doors. Not only can you have negative air pressure, but your chimney could also develop mold and mildew from excessive moisture and water vapor in the air. After mold removal, you can prevent any further bacteria growth by installing a chimney cap to keep out the weather elements. Not only will it prevent the weather from entering the chimney, but birds and other small animals will be deterred from your chimney.

At Valley Chimney, we repair and clean your chimney to keep your home free of smells. Our experienced technicians are equipped with the tools and knowledge to keep your home and family safe from any fireplace and chimney issues as well as mold growth.

What You Can Find In Your Chimney

There are a few things, like creosote and mold that can be found in your chimney, and it should be left up to a professional chimney sweep to remove. Doing the job improperly can cause even more problems and serious health concerns.

Creosote can be found on the lining of the chimney, as it is built up over time. It will go through the heating and cooling phase and then become a glazed substance. When creosote is glazed over, it’ll cause blockage and is highly flammable. The blockage will show the rise of hot vapors and the risk of ignition and flue fire is greater.

It’s best to have creosote removed after the burning season. The risk of fire in your chimney isn’t present during the summer since you’re not using your chimney. Creosote will produce an odor if moisture reaches it, since it’s a dense material. If you notice an odor coming from your chimney during the summer, it’s most likely because creosote has built up and the hot air is pushing it through the heating and cooling phase.

When water vapor is in the air in high amounts, your chimney is more susceptible to the risk of mold and mildew growth in different areas of your home, along with your chimney. Mold growth will happen when there is an excessive amount of dampness in your chimney. We suggest sealing the bricks to prevent any further moisture and looking at the other parts your chimney has, to see if they’re damaged.

In order to remove the mold and mildew, you’ll want to call a certified chimney sweep, as that task should be left to the professionals. Removing this bacteria will help preserve your chimney and keep your home safe.

Smelling something odd from your chimney? Valley Chimney can help diagnose and fix the problem. Schedule your chimney inspection and sweep with us today!

“They were very prompt, professional, willing to spend the extra time to discuss all details. Definitely would call again and highly recommend to others. Reasonable price for the work done after comparing to several other competitors.”